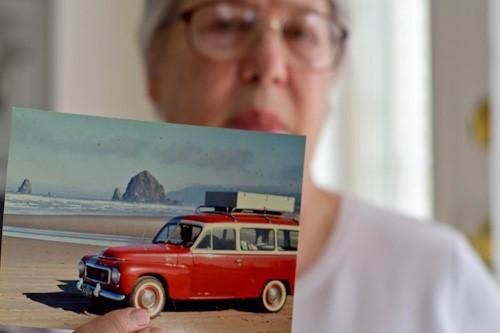 The misty scenery in Joan Petterson’s photo is enough to make anyone nostalgic for a road trip to the ocean. In the early 60s, Joan’s family bought the first-ever Volvo sold in Edmonton—a dark blue and grey P444. But, not long after acquiring it, they traded it for the second-ever Volvo to hit our city’s streets—a replica of the first, this time in bright red. Joan holds up a photo they took when they drove to the Oregon coast in 1961 for a family holiday.

Before retiring, Joan was an elementary school teacher for Edmonton Public, helping kids with learning difficulties learn to read. Now, she enjoys reading mysteries and history. “It’s amazing what you find out when you have some time to read!” she says. Some favourite authors include Ellis Peters (Edith Mary Pargeter), Steve Berry and Deborah Crombie.

“Before he started Sandy Lane, Jim Morgan worked at Crescent Motors. They were the only place in town that knew how to service the Volvo. We have had great service at Sandy Lane over the years and I appreciate being dropped off and picked up. It’s really the only way for me to get there and back.”

WHAT SHE LOVES ABOUT EDMONTON:

“Though I’m not out much anymore, I do swim three times a week and I get a lot out of the senior’s centre near my home, and the exercise classes they offer.”

Thanks for all your years of loyalty to Sandy Lane, Joan!